The second way to develop a sense of balance about paper designs is to look for anticipation. (Anticipation really isn’t the right word for it, maybe “Imperfect Predictability”?) If you make players guess, they won’t see the point and will quit. If you don’t give them a chance, they will feel controlled and quit. Balance means probable, but not inevitable, future events. This allows the player to anticipate them.

David Sirlin (sirlin.net) is a SF Champion and a game designer (and just happened to be in the audience when I gave this talk at GDC.) He calls this concept Yomi.
In an action game like Halo you don’t want players to engage in this kind of second-guessing. It will paralyze them from acting and end up in random guessing. The Sniper Rifle has one purpose; you know what someone with a sniper rifle is going to do. The role prevents you from guessing by allowing them to anticipate what is going to happen. If they are expecting an event, they can process it more quickly and follow the action better.

Successfully sniping confers no benefits. As designers, we throw around the term “Feedback Loop” a lot, but they are not always good because they lead to a game being overly predictable. Anticipation requires uncertainty, and feedback loops work against that.

The best thing about roles is that they help you keep things manageable by breaking the design into workable parts.

If you are using roles, make sure players always have other options. The Sniper Rifle is never your only option, so the entire balance never rests on one weapon. By using multiple gameplay channels you reduce the difficulty of your balance problem.

If you break up the balance into groups that do not require cross-balancing your problem becomes simpler. I won’t say that monolithic is always bad, just harder.

The Sniper Rifle is not on every map. This limits the number of possible interactions that need to remain balanced. 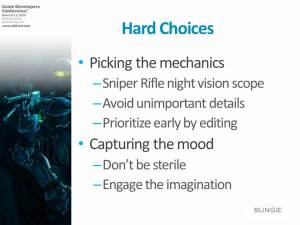 What are the hard choices in the paper design pass? Which mechanics will you emphasize? How will you engage the player’s imagination? 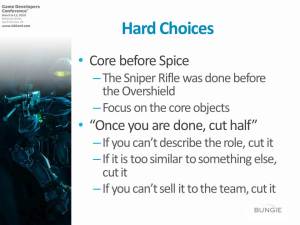 Producers, please insert your fingers in your ears at this time. Some of the best advice I ever got was “Once you are done, cut half” and I have never regretted doing this. I’m not going to say “Kill your babies” Now that I am going to be a dad, the term doesn’t seem appropriate anymore. How about “Put your babies up for adoption”?