I recently finished Uncharted 2.  I thought the acting and the pacing were excellent.  The story followed a well-worn arc, but had enough unexpected set pieces to keep it fresh.  The combat was dramatically improved over the first game, but still didn’t come together enough to justify the amount of fighting required.  The stealth segments swerved between fantastic and frustrating, often clashing with the combat and story elements.  (We can’t shoot the museum guards, but we can throw them off a roof onto paving stones five stories below?)  I loved the sections where I was working with another character to solve puzzles or fight through enemy territory, partially because I know how difficult it is to do useful AI allies. 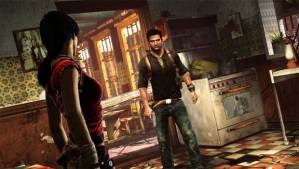 Maybe "ally" is the wrong word

My main criticism of the game is that it is crushingly linear.  There is only one path, straying from it usually ends in a fail screen, and I could rarely anticipate what was going to happen.  I just followed the breadcrumbs and assumed the level designer knew what they were doing.  On several occasions the game goes beyond leading the player by the nose and starts dragging them by the hair.  If the story required a  pistol with infinite ammo, or a checkpoint to skip me through a tough section, or a hint that told me how to solve a puzzle I hadn’t even seen yet, then gameplay took a backseat.

All in all, a new high-bar for storytelling in games and a fantastic experience.  I give it a 7.5!  (Which according to IGN means “there are some issues, maybe it lacks ambition or it is repetitive or has too many technical glitches, but I had fun playing it nonetheless and think you will too.”)

I also played a game based on the 2008 movie where Anikin Skywalker learns to teleport and Mace Windu tries to kill him… or something.  The control scheme is unique.  Instead of traditional brawler controls, each of the four face buttons represents a cardinal direction and tapping it will teleport you to that side of the targeted enemy and execute a melee attack.  By using alternating buttons, you can “jump” behind an enemy, kick him into the air, and then “jump” to where he will land and hit him again from the other side.  The animations are stellar, especially when you start chaining combos and beating the hair-dye out of the chumps trying to capture you.

They use the main character’s signature ability in lots of clever ways.  You can use it to travel through walls and find secret rooms or solve puzzles.  There’s a finishing move where you grab an enemy and teleport you both to some remote location like a mile above the Grand Canyon or the middle of Antarctica and leave them there to die.  (Of course, this makes it ridiculous when they use the tired trope of locking you in a room until all the enemies are dead.  Why can’t I just teleport through the door?)  There are even some enemies that are protected from certain directions, requiring you to time your attacks from different directions or risk being blocked.

A mercifully short campaign featuring unusual and well-realized combat mechanics.  I give it a 7.5!

Did I just say that some budget movie tie-in schlock is just as good as the highest rated game of 2009?  What kind of rating system would result in giving them both a 7.5?  What are you doing reviewing games anyway, isn’t this a game design blog?!  The answer is simple.  In the Game Designer Review Scale every game gets a 7.5.  From the latest AAA masterpiece to the quirky indie game to the bug-ridden RPG epic.  Because for the game designer the goal is not to compare or judge the games themselves, but to exercise and strengthen your conscious control of your own experience.

At the beginning of a project, when you are prototyping a new game mechanic, you are not going to have a polished, tuned experience.  It’s going to be noisy and buggy and awkward.  You are going to need the ability to spot the glimpses of fun, no matter how obscured or faint, even if they only exist for a few seconds at a time.  You need to lower your flow barrier, learn to ignore distractions and technical errors, to focus in on fun gameplay instantly before it slips away.  You need to spontaneously create a polished form of the game through imagination and mental tricks like making your own sound effects and storylines.  All so you can snatch up those seeds and grow them until everyone on the team can see them.

You can practice this form of autoregulation by playing a deeply flawed game as if it were a 7.5.

On the other hand, at the end of the production cycle, when the game is smooth and playing it has become effortless and comfortable, you are going to need to look at it with fresh, critical eyes.  You need to raise your flow barrier and become oversensitive and harsh.  Every tiny flaw needs to become a glaring blight that must be fixed.  Every inconsistency or imbalance, no matter how trivial, needs to break you out of the experience.  You need to be able to put yourself in the shoes of a new player and find every confusing control mapping or unclear mission objective.

And you can practice by playing a truly exceptional game and fixating on the problems until it’s just a 7.5.  You aren’t flattening all games to the same level, you are changing yourself and controlling your experience to learn the most possible.