Even in the case where an element cannot be limited by role, it can be limited by availability.  Sometimes the Player should feel overpowered, either as a reward for a good player or as a temporary boost for an average player.  A game that is nothing but a relentless competence test can become monotonous, especially once a player has reached the limits of their physical ability to get better.  Giving them an occassional taste of unmitigated power relieves the pressure to perform and is an excellent palate cleanser.  An element that is fun and fulfills a player aspiration but can’t be limited to a single role is an excellent candidate for this experience.

Take that, Rock, Paper and Scissors

A successful transition from “balanced” to “overpowered” usually requires some changes, though.  It needs to be exaggerated so the sounds, effects, even the fiction, match the new power level.  It should become a featured element on a single level or two, the player should feel special for getting to use it, and the enemy resistance should be ratched up as well to highlight how strong they have become.  The element should also be made as modal as possible, so the player knows when the “overpowered” experience begins and it is clear when it is supposed to end and resume normal gameplay.

Let’s say an overpowered element doesn’t fit in any of these categories.  It isn’t just a perceived imbalance, the other elements can’t be strengthened to an equivalent power level, the role can’t be limited or enforced, and it isn’t appropriate for an over-the-top set piece.  If nothing else can be done, it has to be weakened somehow, right?  Let me tell you about The Needler…

The Needler is a weapon from the Halo series.  It fires a stream of neon pink projectiles that actively track enemy targets.  On impact, each needle embeds itself into armor or flesh, remaining there for a few seconds before detonating and causing further damage.  If a character ever has more than 5-6 needles attached at any given time, they all explode in a particularly lethal chain-reaction known as the “Pink Mist”.  It first appeared in Halo 1 and was the bane of my existence for 10+ years because it was incredibly fun to use, but equally impossible to balance. 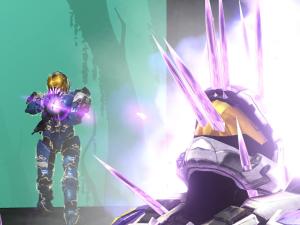 I feel a headache coming on

It would start out too powerful, so we would weaken it.  Which would make it useless, so we would change the mechanics.  Which would make it effective in too many situations, so we would limit its placement.  We ended up drastically weakening it right before we shipped to prevent it from wrecking the game.  Three times!  The amount of effort, thought, debate, programming and art resources, playtesting surveys, data analysis and sleepless nights that were poured into the Needler far outpace any four other weapons combined.

So, even if an element cannot be balanced in any other way, the answer is still not to weaken it, but to cut it completely.  It is too difficult to weaken an element without destroying what made it fun in the first place, and the end results won’t be worth the hassle.  It’s best to just save it for another game where it will fit without compromise.