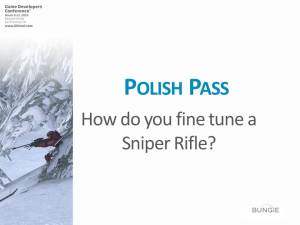 If you were disciplined in writing your paper design, and stayed firm while doing setting up the rough balance, this stage should be very rewarding and exciting.  If not, it is going to be disappointing and frustrating. 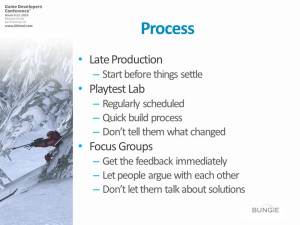 The timing for this stage is tricky.  If you start too early, your balance changes will be swallowed up by the churn of new features coming online.  If you wait too long, the rough balance will become entrenched and the team will object to changes.  Generally, this coincides with a “First Playable” build where everything is at least in the game and functioning.

It’s crucially important to communicate this new phase to the rest of the team, so they know what to expect and understand that now is the time for them to give the feedback they have been patiently waiting to deliver. One way to do that is to implement a controlled opportunity for them to play the latest build and provide their feedback in a structured format.  Make sure you tell them what you are currently working on, so their responses will be relevant, but don’t tell them exactly what has changed or you may bias their opinions. 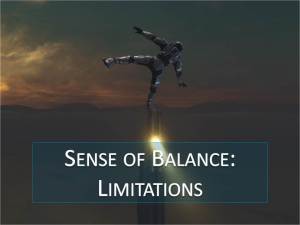 So how do you balance a Sniper Rifle? It is not by adding weaknesses!  Don’t undo the work you did in making it powerful!  Balance it by narrowing its role through limitations. 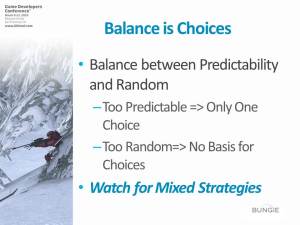 The best way to detect which elements need to be limited is by watching for the game to become predictable.  If the same strategy is being used in a variety of different situations, to the point where players are no longer required to think about which strategy to choose, it means an element is too useful outside of its designated role.  If the Sniper Rifle is not only the best weapon at long range, but players are carrying it indoors and using it against vehicles, it needs to be constrained.  Give it some time first, because the playtesters might just not have figured out the new balance yet, but if it is consistent for a few tests, start looking for ways to limit the dominant element.

On the other hand, if the game is completely unpredictable, it is a sign that the elements are not effective enough at their roles.  A truly random strategy should never be as good as intentionally selecting an element that is strong in the desired role.  It may also be a symptom of a role going unfulfilled.  If there is no Sniper Rifle, the Shotgun and the SMG are equally terrible at long range combat, so it doesn’t matter which one you choose.