So how do you recognize strength when you see it? How can you train yourself to appreciate strength? 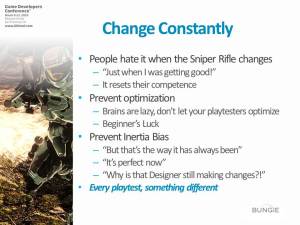 The first way to develop a sense for strength is to change the balance constantly. People hate it because it resets their competence, but it will prevent them from optimizing their skills and their strategies. One theory about Beginner’s Luck is that when you first attempt a new skill your brain is very engaged and thinks the entire action through very carefully. On subsequent tries, your brian gets lazy and tries to take shortcuts, so you are more likely to be successful on your first try than on subsequent tries. Also, development is hard, and deadlines are approaching, so the temptation is to lock things down as soon as possible. Resist temptation and keep the balance changing until you find the true strength of the game elements.

As you strengthen an element, the other elements become relatively weaker. After a pass through the elements, you will find that the first one can no longer compete, and must be strengthened again. Keep doing this until all the elements feel powerful. 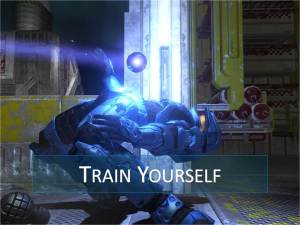 This guy is really good at Halo…

Pro-players often complain that “The guys making decisions suck at their own game” and it’s true! I’ll admit that I’m not very good at Halo. I’ll even claim that I’m not good on purpose! The problem is that the dopamine released for being a good player is the same as the chemical reward for being a good game designer. Since you can’t tell the difference, you may mistake the thrill of winning for the satisfaction of balancing the game. You should always feel like you are learning about your game, and if you start to feel like you have mastered it you need to change something so you aren’t good again. 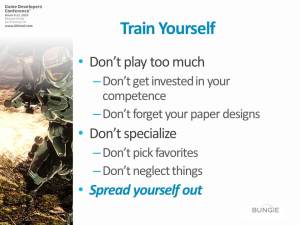 You must acknowledge your own tendency to optimize and ignore problems once they have become familiar. Don’t work on the same element for too long, don’t become comfortable. If something feels so familiar you stop noticing it, change it.

At the same time, if something is right, if it is just perfect and you don’t want to lose it, you need to play it so much that it becomes part of you. I can still, after years and years, drive a new Warthog and tell you if it is tuned correctly or not. I’m known in the Animation Pit as “Three Frames” Griesemer, because if they added a single extra frame to a Halo melee attack I could tell immediately. You need to hone your sensitivity by playing with a finely tuned element over and over until it is ingrained in your muscle memory.