By this I am not describing an absurdly narrow area of expertise… I am describing my aesthetic.

It is easy to become lost in the mechanics and machinations of game design. To glorify systems and metrics and equations and definitions and exceptions and minutia — to obsess over design in detail. It is a habit hardened in the same forge as our instincts, back when we first began to hone our craft. We became accustomed to looking at our feet, wary of missteps, and now we believe the road to be the prettiest scenery. But we are no longer in danger of stubbing our toes — so look up! Beyond mere mechanics lies meaning, and deeper design requires more than technique, it demands values.

One way to understand your design values is to find your ultimate game mechanic. What gameplay action most realizes your design aesthetic? What concept always feels fresh? What tool springs to mind for every problem? For some designers, the Dialog Tree is the root of their art. Others appeal to the direct, uncompromising demands of the Headshot. Some designers have hung their entire career on the Fine-Tuned Economy or the Skill Bar, and their focus has led to many fine games. 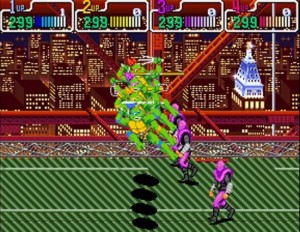 What's better than a jump kick?

For me, it’s all about the Jump Kick. Taken individually, both the Jump and the Kick are atomic, fundamental, with an enormous variety of possibilities. The Jump because it completely analog, a fraction lies between safety and disaster. The Kick because it rests on rhythm, the right moment to strike comes at its own pace. For both, the subtlety and skill come before the action, leaving them pure and as simple as any mechanic could be.

But their complexity lies in their combination. Like rice and broth, staples that become more flavorful when enjoyed together.  When performed in sequence, suddenly the Jump has an offensive purpose and a target — it becomes dangerous! And the Kick expands beyond timing and gains an element of range, even into the vertical! Like two horses yoked together, they become much more powerful than the sum of their strengths. The precision required to balance a Jump Kick, and the richness it yields when well-tuned — for me it the apex of design expression.

Beautiful in every form

So find your ultimate mechanic and explore your design values. It’s important to be intentional about choosing your aesthetic, or you’ll wander into a pit. You’ll become a Turret Sequence Designer, placing spectacle over freedom. Or a Stamina Bar Designer, with no purpose beyond controlling the player. Or the despicable Time Sink Designer, wasting the player’s time and your own. Maybe it’s acceptable to use these mechanics out of desperation, but they are hardly something to be valued. We should all aim higher! Maybe try Jump Kicking!