Purple hippos. Green puppies. Red monkeys. Short term memory is an interesting thing. Yellow birds. Blue horses. It can only hold around seven items (give or take a few, depending on your level of concentration.) Which means for some of you “Orange lizards” is going to drive the first animal right out of your working memory. This is why most game controllers have around seven buttons — White spiders, Pink fish — and most successful action games don’t even use that many. Player’s simply can’t hold all those options in their heads at the same time.

But the most important aspect of short term memory isn’t how many options player’s can remember, but how long it takes for them to fade. Or how short. Neurological research indicates that we start to forget details as few as 6 seconds after being introduced to them. After 300 seconds we are only half as likely to remember a concept, and after 10 long minutes… forget about it. (Sorry.) So that means, depending on your reading speed, you’ve almost certainly forgot the first animal by now.

This has a direct application in determining the length of cooldowns for abilities in action games. (In this context, a “cooldown” is the amount of time that must elapse after an ability is used before it can be used again.) The player stores the fact that an ability was used in their short term memory, and if the cooldown doesn’t expire before they forget about it, they may never use it again! It sounds preposterous, but how many times have you seen someone go through a tutorial on how to use an ability, use it successfully once or twice and appear to understand how it works, and then get utterly baffled when required to use it again just a few minutes later? How many times has that happened to you when playing an unfamiliar game? I know it has happened to me more times than I can remember. (Sorry again.)

So, if a cooldown prevents a player from using an ability for more than 6 seconds, there is a risk that they will stop using it entirely. An onscreen indicator that a cooldown has expired helps, but habituation and change blindness limit how effective an indicator can be, especially when it changes very rarely. Repetition helps, because it transfers knowledge of the ability into more permanent memory, but even this is tricky because with a long cooldown what the player will be committing to memory is the fact that the ability is unavailable, making them even less likely to use it. The options, then, are to use very short cooldowns — between 6 and 12 seconds — or rely on a very noticeable reminder when ability is available again. 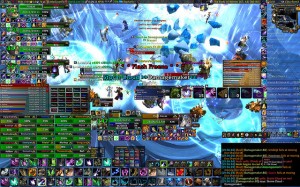 Indicators have their own problems

For an action game, where onscreen indicators are not desirable, long cooldowns lead to mechanics that are often ignored and quickly forgotten. Maroon walrus.

10 thoughts on “Design by Numbers: Cooldowns”