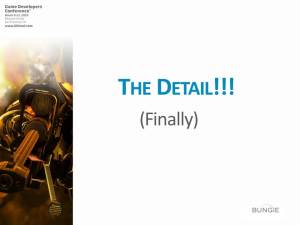 This is the point in development where we finally changed the Sniper Rifle. Now I will try to describe how all the work from previous passes informed this decision…

The Sniper Rifle was overpowered — that’s what we intended, remember – but it made the other aspects of the game feel weaker.  We couldn’t make the rest of the arsenal strong enough to keep the Sniper Rifle in line.  One way we could tell was because the players we had picked out as Optimizers were using it exclusively.  Role Players, on the other hand, were still not using it, but suffering for it.

Worse, the Sniper Rifle was being used at close quarters, which is clearly outside of its role.  And nothing the targeted player could do would allow them to avoid being sniped. 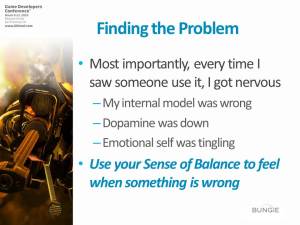 When something impacts you emotionally we say we were “moved”.  Emotions are what compel you to act — not graphs and data.  Use your Sense of Balance to feel when something is wrong and trust those instincts.